Plyscraper city: Tokyo to build 350m tower made of wood

Ns News Online Desk: A skyscraper set to be built in Tokyo will become the world’s tallest to be made of wood. The Japanese wood products company Sumitomo Forestry Co is proposing to build a 350 metre (1,148ft), 70-floor tower to commemorate its 350th anniversary in 2041. Japan’s government has long advertised the advantages of wooden buildings, and in 2010 passed a law requiring it be used for all public buildings of three stories or fewer.

Sumitomo Forestry said the new building, known as the W350 Project, was an example of “urban development that is kind for humans”, with more high-rise architecture made of wood and covered with greenery “making over cities as forests”. The new building will be predominantly wooden, with just 10% steel. Its internal framework of columns, beams and braces – made of a hybrid of the two materials – will take account of Japan’s high rate of seismic activity. The Tokyo-based architecture firm Nikken Sekkei contributed to the design.

The interior structure, with 455,000 sq m of floor space, will be made entirely of wood. Renderings show light-filled apartments, offices and shops.

Balconies on all four sides of the building’s exterior will facilitate the spread of greenery from the ground to the top floors, contributing to urban biodiversity. It is estimated that it will take 185,000 cubic meters of wood to complete the entire structure. 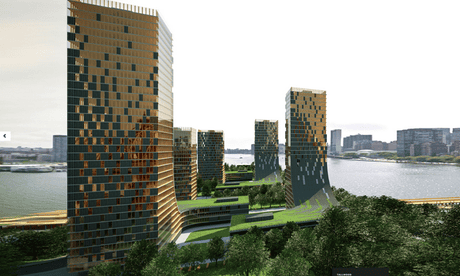 The total construction costs are expected to be approximately ¥600bn (£4.02bn), almost double that of a conventional high-rise building. But Sumitomo Forestry Co said in a press release the total would probably be brought down by technological advances between now and the 2041 scheduled completion date. Around the world wooden skyscrapers are reaching higher. At 244m (800ft), the 80-storey River Beech Tower on the bank of the Chicago River is among the tallest of those proposed. A 53m (174ft) student residence in Vancouver, completed at the end of last year.
Tags: Around the world wooden skyscrapers are reaching higherThe new building will be predominantly wooden
Share 0
Tweet
Share
Share